Ok I'm up to date now - all future posts will contain new stuff. I think 6 'introductory' posts are enough. I'm looking forward to getting outside painting as soon as I can, but the weather's a bit bad just now and the evenings have drawn in.
I'm in the middle of a painting of Millhouse Lane, Goole at the moment which I might post if it works out ok. I'm just at that tricky stage where it could still all go wrong [the first 99%!]
The paintings on this blog are for sale - if anyone is interested in purchasing one please email me for more details kevchilvers97@gmail.com﻿﻿
﻿﻿
﻿﻿﻿
﻿﻿﻿﻿﻿﻿﻿﻿﻿﻿
Posted by kevin chilvers at 03:28 2 comments:

These are the last couple of plein air paintings I did, late August - early September when the evenings were already getting a bit shorter. They were painted about a week apart and less than a mile apart but they look completely different. 'Afternoon walk' was done on a cool, blustery day as a change from sunny day painting. The tones are a lot closer in the flat light, but it was a useful exercise.
'Summer Afternoon' was painted over three 90 minutes sessions on consecutive days, from 4.30pm while 6pm. By then the shadows had gone and the light completely different. I touched it up at home the next day - its amazing how many nuances of colour and tone you can remember after standing there for 4 or 5 hours.
﻿
﻿

Posted by kevin chilvers at 10:33 No comments:

Four more plein air paintings. The Skipwith Common picture is the same farm as in the previous post from a different viewpoint. 'Canty's Farm' was painted in three 2 hour sessions, straight from work each day while the shadows were in the right position. While I painted it the farmer kept appearing [From the barns - not magically!] so I took a few snaps and added the figure at home.
I believe Mrs Canty bought the picture from a local exhibition.
﻿﻿﻿﻿

Posted by kevin chilvers at 12:04 No comments:

These are the first plein air sketches I ever attempted. While I don't want to get too retrospective, the shorter days mean I don't get chance to get out painting during the week after work at the moment, so I thought I'd do a few 'introductory' posts to get the blog up and running. I did the farm scene first on a cold Autumn morning a few years ago. I struggled through some woods to the fence that borders the farm, hoping no one would see me attempting my first effort. I'd just set up when I heard "Oi, What do you think you're doing?" It was the farmer walking towards me - I wasn't even on his land! Obviously he' not seen a box easel before. Or a paintbrush. Anyway I lasted about two hours until I couldn't feel my feet anymore.
The second effort was the boat study. I sat at the edge of the water in the passenger seat of my car - again so no-one could come up behind me to see what i was doing! This was a quicker sketch using my little homemade pochade box.
I think I was influenced by the artist David Curtis when painting these pictures, particularly the use of cobalt violet and cerulean blue, and the idea of painting into the light and creating lit edging.I'd been to an exhibition showing some of his work in Doncaster, and went out and bought one of his books. Its artists like him and Peter Brown [Pete the Street] that have inspired me to get out and try my hand at plein air painting.
I welcome any comments on any of the paintings on this blog.


Posted by kevin chilvers at 10:27 No comments:

Just a few more fairly recent studio pics, then I'm going to post some plein air sketches from over the last year. Hopefully I'll get caught up soon to the present day! 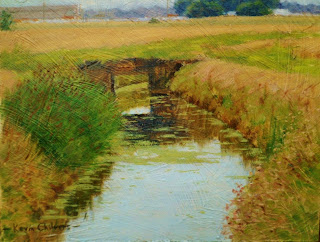 Welcome to my new art blog. My original idea was to do a plein air art blog, inspired by artists such as Dave Pilgrim, Roy Connelly and Karl Terry, but as some of my paintings are done in the studio I'll just post everything I do. I'll start with a couple of recent studio paintings.
﻿﻿﻿﻿
﻿﻿﻿﻿﻿﻿﻿﻿﻿﻿﻿﻿
Posted by kevin chilvers at 08:14 No comments: